Today Rm 5 versed Rm 1 at ki o rahi. ki o rahi is a fun game that we learnt about last week for our reading. It was so fun playing ki o rahi my team won both of our games. Ms. Va'afusuaga and Tyson were referring the two games that were going on. one game was on the court near team five and the other game was on the netball courts. They split us up into four different teams. Two teams played each other and the other two teams played each other. The teams that lost would verse each other and the teams that won would verse each other. There are two rounds in each game. In the first half one team in Defence and the other team is attack, then in the second half they switch. Ki o rahi is a mix between ripper and netball and lots more different games mixed into one. If you want to play ki o rahi you have to be really good at catching the ball. 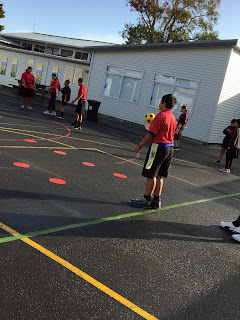 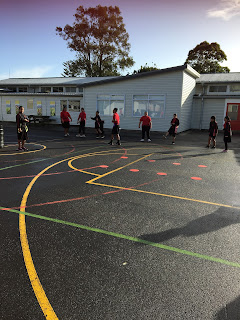 
Task Description: This is one of my maths tasks this week. and it is about decimals we have been learning about decimals a lot lately. and I HOPE YOU LIKE IT!!

Today we did a writing test. we had to write about a picture but I didn't really end up doing that. But I think it's pretty good story. when I was writing my story I was thinking of movies but not any movie a movie about my story. HOPE YOU ENJOY.

A Few days ago there was a letter for me. I usually don't get letters. Once I opened it the phone rang and it was one of my best friends Jayah. She said that she got a letter saying it was about a treasure hunt that we signed up for years ago we totally forgot. Soon after I looked at my letter it was exactly the same. After we called Lepisi And Yolanda my other best friends. They said that they got a letter to. So we all met up at our clubhouse. We decided that we were gonna go. The winning team wins 1 THOUSAND DOLLARS. But we wondered who’s the other team?. The next day we got to meet the other team they were really amazing but so mean. There were three girls and one boy but it didn't matter we knew we had this.


We were at the starting line. We had our map. We had our gear. And we where ready to go. They said that there were challenges along the way but they got harder and harder. We thought we had it but we didn't but we never gave up. The levels went harder and harder trickier and trickier. We still made it. The hardest one was when we had to swing from vines so we wouldn't have to walk in quicksand all of us made it but at the last minute lepisi fell.

Luckily Jayah was really smart so she knew what to say and do. She told her to stay still and be calm because if you move around too much it will just take you down faster. She was in the middle so it was hard to pull her out. We couldn't grab her and suddenly she disappeared. But just then Yolanda heard something “HELP HELP” she heard it was Lepisi coming out of a hole she was safe but very dirty. I guess they didn't want anyone to get heart.


We finally caught up to the other team. But then we realised that our map is sending us different ways but we still followed our map. Even if we didn't win it was still a lot of fun. We were getting tired but we had to keep climbing once we got to the top of a small little mountain. Well it didn't seem like a small little mountain. Anyway a few moments after that we all stabbed our flags at the top of the mountain. A helicopter came to take us back to the start to collect our prize but we didn't even know if we won or not.

We didn't win. but we still had something. Gift cards to the apple store but it was still better than nothing. We were proud of ourselves for trying our best and we wondered what we would do with 1 thousand dollars anyway.
Posted by Aaliyah at 10:14 No comments:

Hi welcome back to my blog. So we did another Taha challenge today Taha Tinana. For this challenge we had to see how much push ups we can do in 1 minute. Room 5 tried to do it at the same time, I think I only got up to 12 or 13 push ups. but I think that I'm going to do a different challenge but i'm going to be trying to do a bridge for 2 minutes. and here it is.
Posted by Aaliyah at 09:23 No comments:

Today I did another Taha challenge - Taha Hinengaro. we had to meditate for about 3-5 minutes with nice calming music. And this is what I saw.


I felt very calm and relaxed when I was meditating or whatever you would like to call it. It was very calming and I saw a big waterfall and my family in my mind or like I don’t really know what to call what I was seeing. It was a forest. A really big forest little kids were building forts with wood laying around older kids playing in the water and doing bombs. There was a big waterfall and a house in the distance. Mums and dads taking photos, papas chilling out on their chairs. And some cousin trying to find the perfect spot for a selfie.


After we stopped I felt really calm and relaxed and a bit tired. It felt really good to feel calm and happy. You guys should try doing that for about 3-5 minutes with nice calming music it’s really cool.

here's the link so you can try do the taha challenge to.
Posted by Aaliyah at 10:19 1 comment: 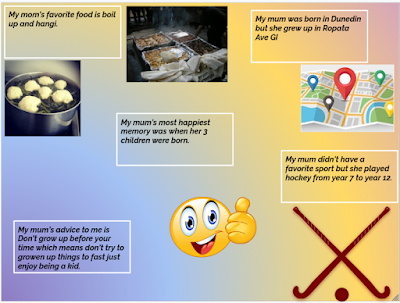 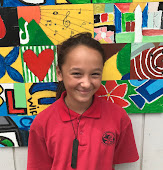